Inspired by the recent Ork vs. Ork game that I played, and needing to get these guys off my table, I decided to kill a bit of time by base coating the flesh on these grots. I used Caliban Green for this, which turned out really dark on top of the black primer.

Normally I would use my twenty five year old Goblin Green for this next bit but for some baffling reason an old Foundation Paint from around six or so years ago called Gretchin Green leapt into my hand. Odd thing, I didn't buy that to paint greenskins with, but because I thought I might use it on Bolt Action miniatures. I was about to put it back when it occurred to me that this is a thicker paint than that old Goblin Green and should coat really well over that dark Caliban layer. And...wow, this turned out great!

I liked this look so much I was tempted to just stop and declare the battle already won. I kind of dry brushed on the Foundation Paint and it created this natural tonal gradation over the Caliban Green. I really liked it. 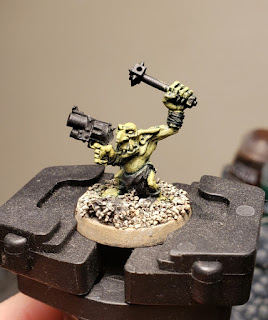 Gretchin Green over black primer.
However this would clash with the rest of my Orks and Gretchin, so I decided to proceed. But then I had another idea for this stage. Normally I mix Yellow and Green Ink until it looks a bit like Anti-freeze, then I thin that a bit with water. I used that as a wash over all of my greens greenskin flesh. The problem with that is consistency as I rarely get the mixture exactly like the previous batch. And the other problem is how long it takes to do and sometimes I have the third problem of figuring out what to do with the leftover mixture or find that I didn't mix enough. And sitting right there on my desk was a paint I got right when 9th was launched: a Technical Paint called Tesseract Glow.
But I was hesitant to try it. Up stepped this guy who volunteered himself for the next stage of my experiment. 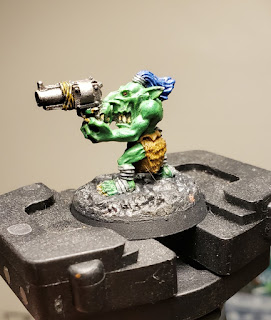 "Pro-painted"?
The same deal that got me these grots included this guy also. It's painted ok, but just not in a scheme that will work with my army. However it is a decent basecoat for my style so I decided to go ahead and proceed with my experiment and applied the Gretchin Green. 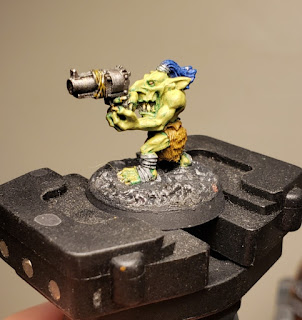 Gretchin Green.
So far so good, and I thought this was looking rather well, so on to the Tesseract Glow: 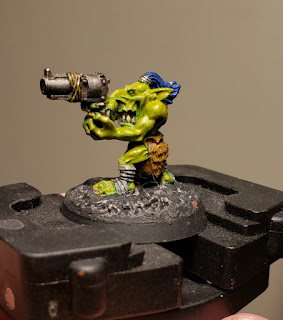 Tesseract Glow.
I was really pleased with this! So much so that I was tempted to stop it here. And I did for a few days, contemplating this miniature during that time. But an experiment is an experiment and I had to take It's finale. 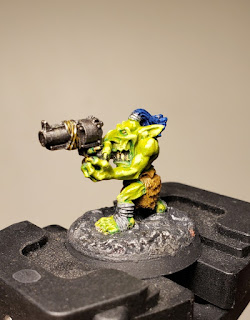 Kiwi.
Kiwi was my next stage, and it really kicked up the color. 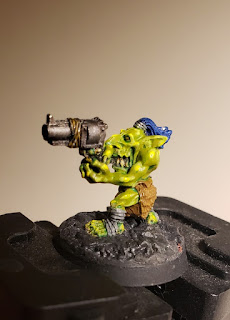 The final highlight was Sunburst Yellow. And... I think I dig it. So here he is compared to on of the grots from earlier with just the Gretchin Green color, and a Bad Moon Nob (that I really need to finish). And...I think it works. But I could use some feedback to consider so feel free to comment below. 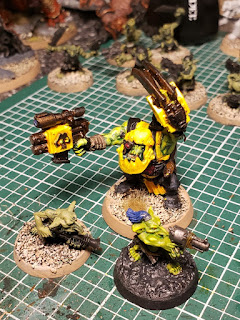 A gathering of Green.